Reuben Pace, the brains behind City of Humanity has embarked on a journey with a purpose and a message to send to the people. Through the essence and passion of artistic pleasure, this is the ambitious desire of a man who wants people to appreciate the joy that derives from music and the need to give our native tongue (the Maltese language) the appreciation that it deserves.

City of Humanity is a project built on three fundamental elements: history, music and language. The operatic performances intertwine these elements together, thus conveying the work’s philosophies in a very strong multidisciplinary artistic language.

Most journeys in life are not planned but they are built, step by step, brick by brick and that is how this project was created. “City of Humanity came to life because of the passion that I have towards Maltese history and heritage”, says composer and producer Reuben Pace.

Pace addresses the issue about his thoughts regarding the Great Siege of Malta (1565) and its impact on the Maltese islands. “In my mind there was always this recurring thought about how no operatic performance was ever written about such an impactful moment in our history”, he says. This was the stepping towards the creation of the operatic cycle and this is just the beginning. 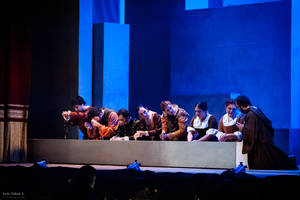 “Maltese is a captivating language and it can express certain kinds of linguistic elements that other languages cannot”, says Pace. He continues to say and emphasises about how the “Maltese language has all the necessary qualities like every other language to be used as a means of communication in operatic performances”. This is echoed in a statement by the Portugese baritone Ricardo Panela, the only-non-Maltese soloist in the first opera (who premiered the role of De Vallette) – ‘The world needs more opera in Maltese’. In fact, all the librettos for all three operatic performances are written in Maltese. Furthermore, they revolve around our islands’ past, present and future.

Whilst the operatic performances revolve around the Maltese culture, history and language, the message they want to convey goes beyond our islands. Subtitles in English are included in each and every opera for the rest of world to witness, enjoy, learn from and appreciate. 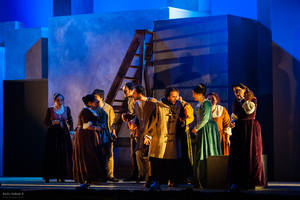 During a three year period through each operatic performance, Pace wants to tackle the different Sieges of each historical context that go beyond what we could expect. One has to be open minded and understand that the concept of Siege is not applied only in the context of warfare in these works but its meaning reaches beyond, into human conditions.

With the premier of the first opera (which revolves around the Great Siege of Malta in 1565) over, the second installment is already in the making. Set during the Second World War, the second opera incorporates musical elements influenced from pop music of the 1930s and 1940s along with the contemporary idiom typical of Pace. Religion has been part of our Maltese culture for many centuries, thus it is part of our identity historically. In fact, religious aspects and ethical impacts are also present within the second musical performance.

The Age of One or Nil, the last opera in the cycle takes City of Humanity on to a whole new level. First and foremost, instead of being depicted in the past like the other two, it is set in the present and the future. The third instalment addresses other issues that we are living with at the present moment and that will keep on growing as time goes by. The Age of One or Nil identifies the problems that arise with consumerism and technology, the impact that they are having on us and how we have become their slaves. The ongoing siege on Mother Earth to make more space for hard cold concrete is also an issue that is being addressed. 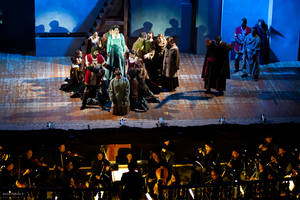 In the final part of the project, the audience isn’t presented with the conventional wars of the past which were fought with bombs and resulting in several casualties but with the wars that we are all individually putting on ourselves by becoming slaves of politics, social status and consumerism. This is the message that will be conveyed with the final operatic performance and I am sure that it will be an eye opener to many people. Pace is creating an artistic and educational legacy by incorporating history, language and music altogether. He has  incorporated our Maltese identity and heritage and he managed to combine them with an artistic and musical rhythm whilst conveying strong messages to the public.

After the ending of this project which “hopefully in a hundred years will become cultural heritage itself”, Pace has more surprises up his sleeves. Until then we will patiently just have to wait and see.

The City of Humanity project is supported by Funds from the Arts Council Malta, is being done in collaboration with the Ministry of Education and Employment and is endorsed by the Valletta 18 Foundation.