Would you like to be part of our team for the Valletta 2018 Opening Ceremony and work closely with Spanish world-renowned theatre company La Fura dels Baus?  We are looking for participants to join us and be part of this exciting project.

ABOUT THE OPENING EVENT

Our Opening Ceremony will be drawing great crowds to the heart of Valletta where we’ll be celebrating a grand festa through joy, dance, music and revelry that fill Valletta’s four main squares: St. George’s Square, St. John’s Square, Castille Square, and the area around the newly restored Triton Fountain, where La Fura dels Baus will be giving an incredible show.

The Opening Ceremony will be happening on Saturday, 20th January 2018 with shows starting from 7pm onwards.  La Fura dels Baus will be giving their performance 5 times on the same evening in order to allow a bigger audience witness this special moment.

Applicants need to be active and adventurous, be 18 years or older, and be fully available on all the below days.

Performance date: 20th January 2018 – time for participants still to be determined by the Foundation

Special priority will be given to those who weigh between 60 to 80 kilos (due to technical requirements) and are not afraid of heights, however, if you do not fall within this criteria you can still be part of this exciting project. We are also looking for participants for other roles for this La Fura dels Baus project.

All participants will need to be present for all rehearsals as stipulated above, and will need to adhere to strict health and safety regulations.

Remuneration:   There will be an honoraria fee for chosen participants for their commitment and time.

Fill in the application form found in this link, and come to the audition on the 18th November 2017 (we will confirm the venue for auditions and send you all the information via email prior to the audition once you apply).  There are limited spaces available and a selection will be made according to the show’s requirements.

For any further questions, please don’t hesitate to contact us on [email protected].

ABOUT THE HUMAN NET:

The Human Net is the name La Fura dels Baus has chosen to refer to a theatrical element involving innovative engineering and capable of generating aerial choreography in which a large number of participants are involved, harnessed and suspended in mid-air.

​The spectacularity of this element is defined by the different possibilities of transformation and evolution of the actors hanging from it.

La Fura dels Baus is a Spanish theatrical group founded in 1979 in Barcelona, known for their urban theatre, use of unusual settings and blurring of the boundaries between audience and actor.

The company is all about eccentricity, innovation, adaptation, rhythm, evolution and transgression. Such characteristic and unique essence led the company to pioneer the reconceptualization of two of the most significant aspects of the dramatic art: the theatrical space and the public. Thus, respectively, they redefined the space by moving it to non-conventional ones – and changed the public role from passive to active, which meant a breaking of the “fourth wall”. And it is that there is no creation without risk – a compiled premise from the beginning, since their first street shows, where the authentic essence of La Fura was born.  The incessant curiosity and the need to explore new artistic trends have developed, through a process of collective creation, a unique language, style and aesthetic. Nowadays, this is called “Furan language”, which has been implemented in different artistic genres, such as opera, cinema and large-scale performances. 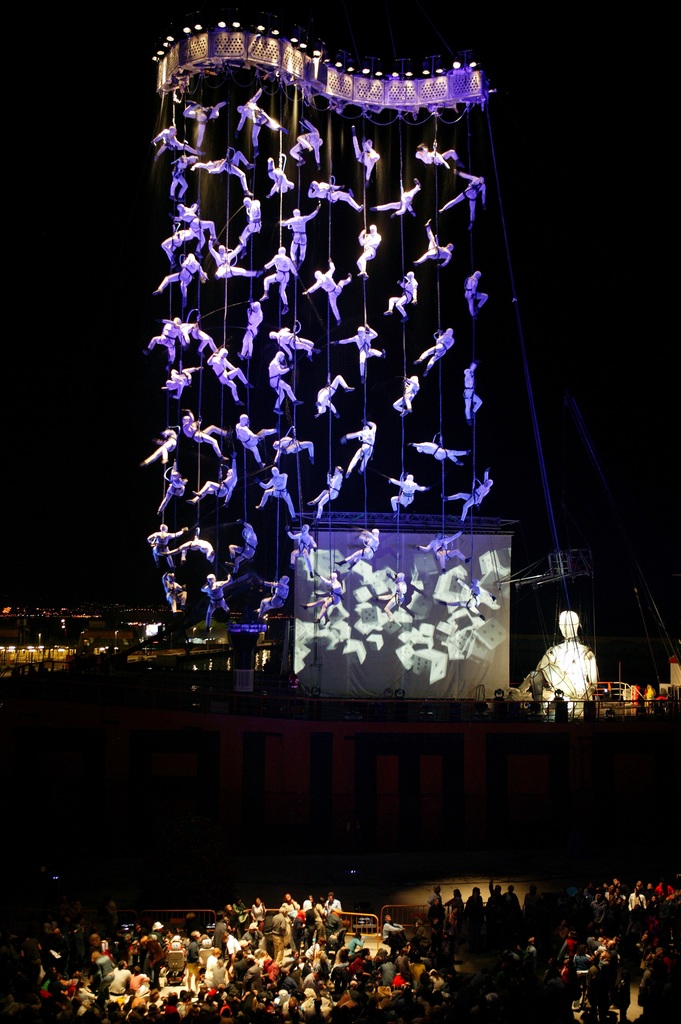