Everyone has their own mask which hides something from the outside world, exactly like the mask they wear in the Good Friday processions, where they hide their faces and walk around with big chains around their legs. Some do it as a tradition, others as amateurs … but there are also some who do it due to guilt. Who is there standing behind a mask with only two holes for the eyes? What identity does this mask hide behind it?

This is what the play ‘Il-Ħarsa ta’ Kristu’ was about. A play written by Joseph Galea and acted out by the very talented 8 Maltese actors; Carlos Farrugia, Antonella Galea Loffreda, Aaron Fenech, Lorianne Bugeja, Marilyn Abela, Stephan Bezzina, Steve Cilia and Patrick Tanti. Along with the backstage crew and the other people who are not at the forefront, an amazing performance was performed which kept me reflecting on it even after going back home. The play was 75 minutes long, without a break, but as they say time flies when you’re having fun. My friend and I couldn’t believe it had already ended. 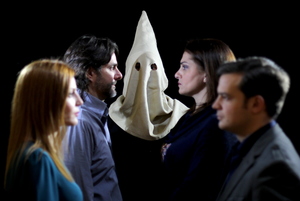 The play is about two Maltese couples who met in Spain, whilst on holiday, on Good Friday. They talk about how in the olden days on Good Friday everyone held back and fasted, mean while nowadays it has become like a normal feast – eating, laughing etc. During the play the characters slowly start revealing their real identity under the mask they use to hide their pasts. This play has a very surprising ending which answers all the questions the mysterious element during the play had made the audience question.

When we arrived there, we were greeted by hooded man which kind of set the scene even further. The whole audience was mesmerized by the amazing performance. I have to admit that I have always liked all the performances by ‘Spazju Kreattiv’ since they make you look at certain things in a different way of thinking. I’d like to congratulate everyone who had anything to do with the play, since it was absolutely a great performance. I’d also like to thank Valletta 18, for allowing me to participate in this event and for enabling me to express myself in this review.

This performance is part of the Spazju Kreattiv Programme.