Last Sunday 18th March at 3pm, I went to start off my experience as a Valletta 2018 Youth Blogger by watching the 80-minute-long musical “Hush”, staged at the Manoel Theatre. The story that this musical tells revolves around Gus Nightingale; a role played excellently by David Coppini. As soon as the play starts, the audience realises that Gus comes from a very happy, musical family with his mother described as being a most famous singer whilst his father plays the piano and Gus happily plays the violin. However, disaster strikes when Gus’ mother gets very sick and eventually passes away. From then on, his father barres any musical instrument in the home and this cumulates to the loss of the critical and most necessary link of communication between father and son leading them to retreat to their own silent worlds. In the wake of their grief, it was indeed such loss which further emotionally broke the boy. Primarily, the story was told by the various characters composing the ensemble which through choreographical and musical compositions further aid the audience in understanding what is happening in Gus’ silent world. 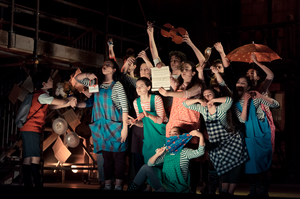 However, Gus reaches his emotional breaking point when he sits for an audition with the evil, villainous Maestro who, overcome by the green-eyed monster of jealousy for this young boy’s magical voice orders him to “just HUSH”. It was indeed then that Gus takes the debilitating decision to speak no more and sing no more. Most certainly, Gus comes to this decision since he felt that he did not have anyone to turn to or anyone who cares about him at all.

On his way to school, every day, Gus passes by a locked-up music shop. One day, when he is emotionally at his lowest, the shop opens for him. When he enters, he feels captivated in the world that he had been forcedly shut out of; the world of music. There he meets the owner of the shop; the sweet Clementine Pickles, a role played by Martina Rizzo. The lady is able to communicate with Gus as she is able to hear his inner voice and thus, she is the first person that Gus is able to communicate with since he decided to no longer speak and decides that she is his new best friend. Her shop seems to be a resting place for instruments which are no longer fit for purpose and Clemmie encourages the boy to play the violin again even though the instrument has no strings. She believes that music is something that sustains us when we are at our lowest and even though it cannot be played, it can still be heard in our hearts and empowers us.

Nevertheless, the villainous aura surrounding the Maestro is to have its toll on nice and sweet Clementine when he breaks into her shop to steal the precious Conductors’ Baton whose powers are unknown to Clemmie herself. Upon seizing control of it, the Maestro had the power to effectively hush everyone’s voice, except for Gus’. Suddenly, the musical which was highlighted with loud exclamations and singing seemed to be overcome with such silencing spell as even the audience fell dead silent. The diabolical maestro wanted to compose the last piece of music on earth and after that, he wanted to silence everyone. However, the only voice that was not destroyed was that of Gus, probably as since he had not spoken for such a long time, the Maestro did not think that he had a voice anymore.

However, his voice was never dead nor destroyed like the others’ but simply hushed away and buried deep within his soul. It was the confidence given to him by Clementine which made him pluck his courage and challenge the Maestro. It was indeed “One true voice” which broke the spell of silence cast over everyone by the Maestro. With the magical powers of the Conductors Baton, Gus managed to imprison the Maestro within a large black book which he took to Clementine who promises to keep it under lock and key. 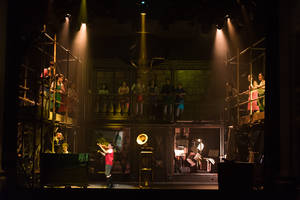 As a bottom-line, I would like to congratulate all actors on stage and all backstage crew for such an exceptional performance. I am sure that behind such magical performance lie uncountable hours of rehearsals and commitments.