Austrian filmmaker Virgil Wildrich together with Maltese music artist Sonitus Eco generated a unique piece of work this Saturday 17th February at the Salesian Theatre. Entitled “Icon Island”, the event consisted of a “Live Battle of Pictures and Sounds”; a collage of visuals accompanied by improvised live music. This event, the second on the musical programme for Valletta 2018, featured an array of extracts from 150 films, with some having shots captured on the Maltese Islands.

The project consisted of a disparate arrangement of the extracts merged together with the common aim of representing the metaphorical journey to an island. In the same way which the scenes from different films merged together, the same concept of linkage applies to the relationship between the audio and visuals. The calm waters were reflected by smooth and composed rhythms and tunes, while scenes of activity and chaos were accompanied by powerful and agitating music. In spite of the complementary nature of the music towards the visuals, there were also instances of contrasts. However, is the essence of these situations perceived in the same way by different viewers? While one viewer might perceive a conflict between the pictures and sounds, another viewer might find that they are compatible. This brings forward the significance of context. The decontextualization of scenes of films from the film as a whole, together with the merging of those scenes with other scenes from separate films has the power to completely change the aura which the original context aimed to create. 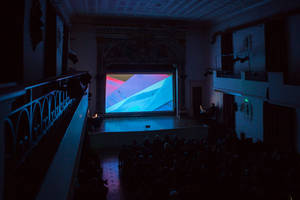 After the event, I spoke to Wildrich and asked him what inspired such a project. He explained how he wanted to stem away from the stereotypical idea of how islands are depicted as a paradise, and are mostly seen in this way by people who don’t live on them. The fragmented make-up of the project overall mirrors the contrasting views on islands: how they are paradise and prison. This ties in with the concept of perspective, and looks at the metaphorical journey towards an island as being an introspective process with various possible outcomes. 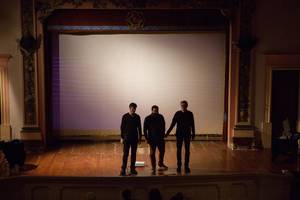 I greatly enjoyed this unique event which went beyond the traditional idea of a film, and in Wildrich’s words was a unity of “sounds, music and atmospheres”.