Two words can be used to describe this performance, simply amazing.

The opening act was an organic choir, a concept from Holland where the core concepts are rotating leadership, original repertoire and a combination of written music and improvisation. The choir gave me goosebumps. The way their voices merged together was beautiful, they had chemistry and when one made a mistake the others adapted to cover it up. They also involved the audience showing us the basics of organic choir. One can appreciate the effort that goes into this as the singer must be attentive to the leader of the group yet also create a melody on the spot. 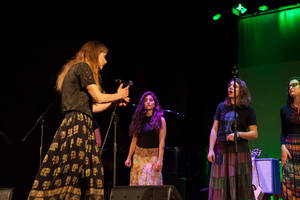 After the organic choir, it was time for Ida Kelarova and the Jazz Familija. A group from Czech Republic and Slovakia who play traditional gypsy music fused with a jazz style. The songs they sang were about the troubles of everyday life and she explained that even though one could not understand what she was singing they could understand the overall emotion of the song and adapt it to their own situation.

Ida’s message was a beautiful one regarding, freedom, tolerance, peace and not to be ashamed of yourself and this was accompanied by beautiful music. The group put passion and emotion into every note and were full of energy. One of the most emotional parts was a song dedicated to her father who she loved dearly. She explained how her father was ashamed of his gypsy identity and tried his best to hide it and she believes that this is what led to his early death. 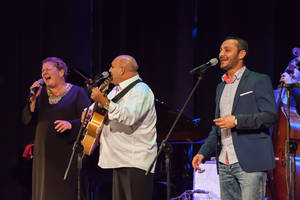 Ida invites us to open our hearts and feel the music because “Music is the medicine of the soul”.

The percussionist stood out and mesmerized the audience during his solos, his hands moved so quickly that he left the audience speechless. Their overall performance was unforgettable, the singers were amazing and the style was fun and enjoyable and was surely enjoyed by everyone as they were given a standing ovation at the end of the performance. 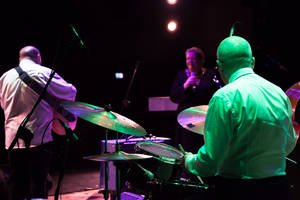 Ida closed off by saying “The only thing anyone needs is love and music”.