I had never heard of Ta’ Bistra Catacombs before hearing about this event, and I walked into the building not knowing what to expect. I wondered to myself, why were the Kantilena and the Ta’ Bistra Catacombs chosen together? Well, according to Maltese composer and Artistic Director Ruben Zahra, the aim is to reach different communities, and to give the public the opportunity to have an experience in an unusual archaeological site, which is why we have chosen sites which are not very popular with and might not be accessible to people. He also wanted to give the public the opportunity to appreciate our cultural heritage in a musical context. 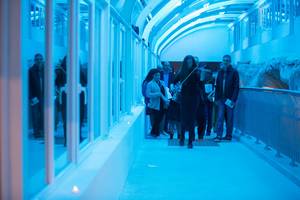 Kantilena Procession is a site-specific electronic music work, which means that the music was specifically written for Ta’ Bistra Catacombs. Upon discussing the subject with Zahra, when discussing ideas for the event, it was decided that it would follow an itinerary, since the structure of the catacombs would make it very difficult for the audience to be gathered in one place, and walking along the walkway would offer a nicer experience.

The Kantilena, is the oldest known literary text in Maltese, and was written in the 15th century. It was found by Professor Godfrey Wettinger and Fr Mikiel Fsadni (OP) and is written in medieval Maltese with a strong element of Arabic. All of the words found in the cantilena originate from Arabic, except for one, “vintura” which derives from italian. Ta’ Bistra catacombs, have been hidden for over 1500 years, when in 1933, they were properly excavated by Captain Charles Zammit, son of Maltese Archaeologist, Sir Themistocles Zammit. These catacombs are located halfway between the ancient town of Melite, and the harbour of Salina. They are considered to be among some of the most important catacombs on the Maltese islands. Ta’ Bistra is made up of 16 groups of burial sites, amounting to 57 tombs. These catacombs originated as a quarry, but, there is no evidence as to who the people buried are, since there is no evidence that might suggest so. It is assumed that the people buried were in fact the same workers that worked in the quarry. 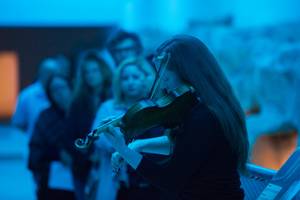 The composer, Luc Houtkamp, used the violin for the main melody, as it is a physical sort of instrument, and sings the sounds it creates. The main melody was backed with the Kantilena itself accompanied by various sounds created with a computer, which reflects the Kantilena. The ending of the performance is very dramatic. Houtkamp states that it took him around four to five months to write the music, especially since he had to work on two levels, to make the electronic part of the music, and at the same time he had to write notes so as to make these two parts fit together. The violin part, portrayed excellently by violinist Brianne Curran, was simple at first, but then became more dramatic and complex as the performance progressed. 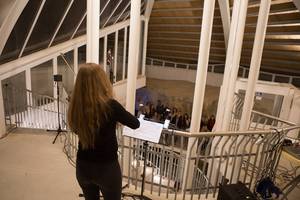 Ta’ Bistra Catacombs, together with the Kantilena are a part of Maltese culture, and something that we should be proud of. This event is the start of many to come, a celebration of our culture.