The sun was setting as Paul Portelli’s character introduced the characters of the story. l-Ikla t-tajba centres around a noble man with a deformed hand who is now dead. The audience learns his life story from the moment he was conceived to his death through the use of props and the casts’ body language. In addition to the casket which was also used as a table on which the women feasted upon, the costumes worn by the cast show a sombre time. The noble man’s father was knowledgeable about food and thus, throughout the performance, the audience learns how to properly prepare pork. Furthermore, this performance served to be an eye-opener on the distinct difference between the food of developing and developed nations and how consumerism and mass production is killing us. 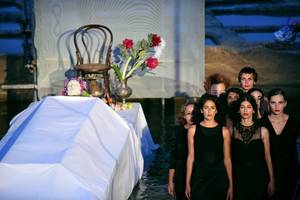 The location was perfect for such a performance as it was enhanced by natures’ elements in the sense that as the orange tinged moon was in the background, the emotions set by the cast and by the poetry of Immanuel Mifsud, made the audience feel isolated from everything else but the performance. Additionally, the salt extracted by the salt pans was said to be one of life’s vital ingredients. Thus, the audience learns about the main character’s life story in a place that offers the perfect conditions needed to get salt from the sea water. 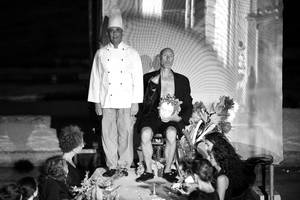 This performance is nothing like I have seen before; the audience figured out the meaning of the story through the use of props. Each prop had connotations and symbolised something else, hence the audience were not spoon-fed the meaning at every stage of the performance and had to figure out through connotations. For instance, the black bullhead used may imply distressing times in the mothers’ life. This negativity was further emphasised through the song-poem about the fate of the mother. 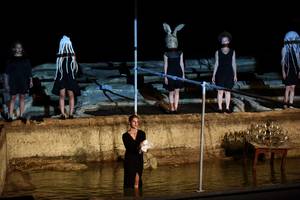 After the performance, a communal meal was prepared by Ta’ Mena Estate, so the audience could feast upon delicious pork, vegetables and drink wine whilst discussing the possible meanings of the performance. Since the event took place in a relatively remote place, shuttle buses were organised which could take you to different areas of Gozo. In sum, I thoroughly enjoyed the ingeniously devised performance, the delightful meal and consider myself grateful to have been able to attend.