Parade was originally only a 20 minute long piece but the artistic director, Ruben Zahra, took this as an opportunity to tell the audience about some aspects of Satie’s eccentric life such as how he only ate white foods and exclusively wore 7 identical velvet suits for 10 years. He did this using projections that would appear on a screen at the back of the stage, such as injecting ink into a water tank, showing quotes and at one point even used a form of shadow puppetry. 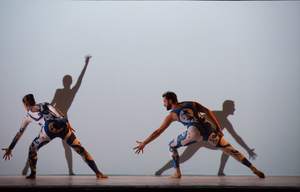 Zahra also introduced other musical pieces by Satie and other composers such as George Crumb, John Cage and Maltese composer, Charles Camilleri. These pieces were played by two pianists Giselle Grima and Dawn Williams. A number of these pieces were accompanied by two dancers from the Moveo Dance Company with the use of projections.  An interesting number was played on prepared piano where the sound of the piano was manipulated by placing paper over some of the strings to make a different sound. 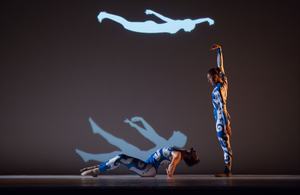 The entire thing was well done and it was a captivating performance.