Guest blogger Charmaine Zammit muses on her first day of last week’s Curatorial School. Find out what she took from it… 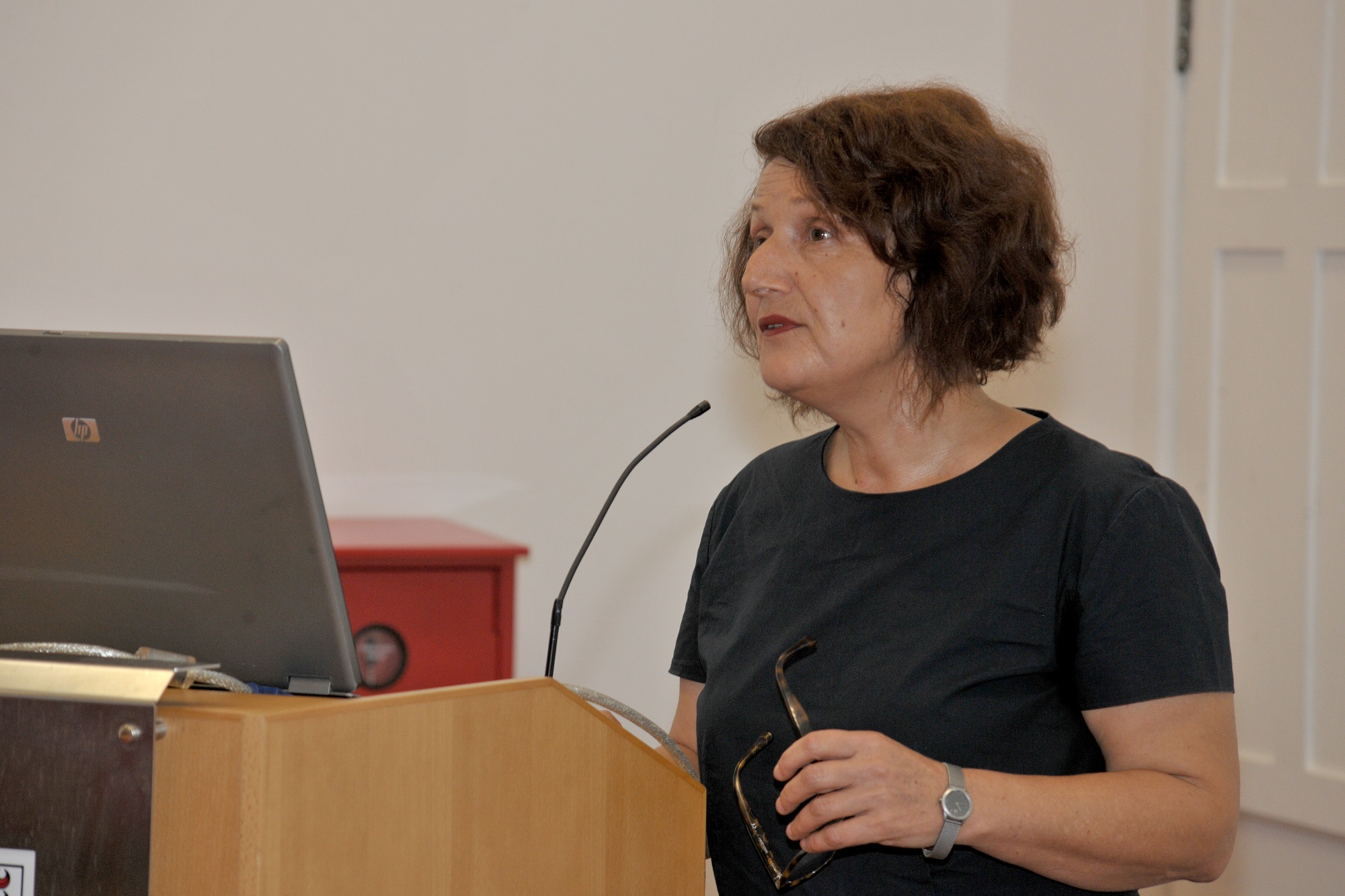 Fulya Erdemci during the Curatorial School

On entering the University of Malta Valletta Campus, to attend the first day of the second edition of the VIVA Curatorial school, it felt good to observe the smiles of both the familiar and unfamiliar faces.

After a warm welcome by VIVA Artistic Director Raphael Vella, the first lecture by Fulya Erdemci included a video depicting public protests aimed at rescuing Istanbul’s Gezi Park from being demolished in order to make way for a shopping mall and luxury apartments. The video showed how communities can band together and how art can be political. As I wiped a few tears to avoid smudging my makeup, it felt amazing to be reminded about the potential of the arts in bringing together communities of people from all walks of life. Despite the extreme use of police force seen in the video, the Turkish people kept resisting for a good cause, because “unlike many other fields, Art has the power to unfold the system” (Fulya Erdemci). In relation to the notion of power, during a lecture by Simon Sheikh, the concept of the ‘Curatorial’ was described as including a substantial amount of power in the selection of art and artists. This made me wonder how humans are always struggling in search of ‘power’, even in the artworld! 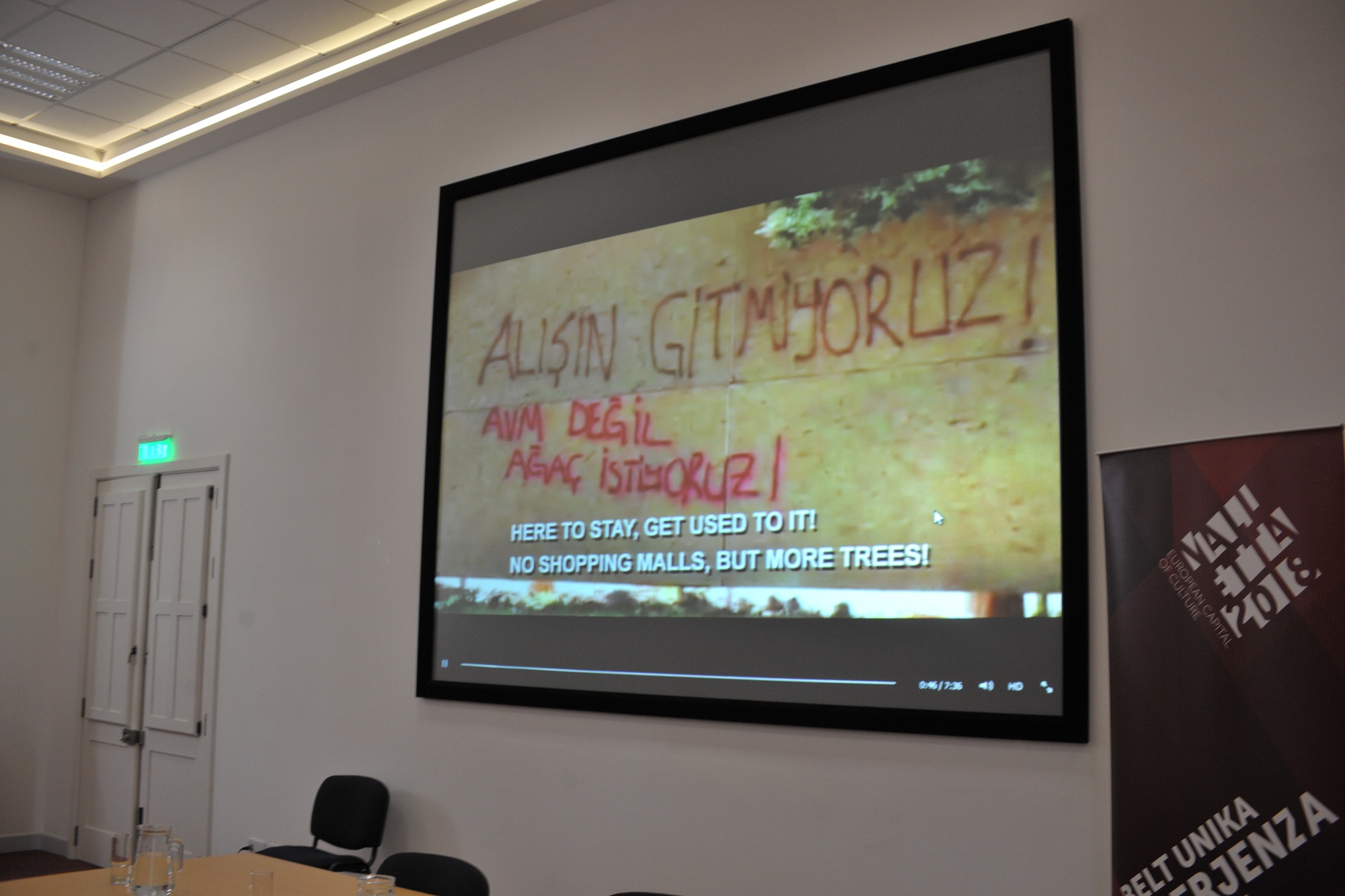 A shot from Fulya Erdemci’s presentation.

“Wonderland (2013)”, another video shown by Fulya Erdemci, is the work of Turkish contemporary artist Halil Altindere. Presented through a hip-hop music style video showing rebellious youths, Halil aims at raising public awareness about the anger and frustration of a group of youths from the Sulukule community of Istanbul, whose historic area has been increasingly destroyed due to urban development.  Being an educator myself, I must admit that it was a bit shocking for me to watch youths’ violence towards the police in the video. Fulya remarked that Halil decided to respect the expression of the youths without censorship. This aroused my curiosity with regards to the issue of unlimited expression allowed for the sake of creating Contemporary Art. How would local youths react or be inspired if they were to watch such a video, which after all, represents contemporary reality of youths in other parts of the world? As an educator, am I also to allow students to express their anger and frustration in whichever way they choose to, due to Contemporary Art’s unlimited potential service to unfold the system?

After the lunch break, I attended Simon Sheikh’s workshop ‘Programming the Public’, which as expected, aroused several hot debates, mainly concerning the real value versus the perceived value of artworks. A few participants argued that if the curators allowed any art to be displayed, artworks might no longer be perceived as of ‘high value’. A participant argued about the fact that people still flock to see a work by Leonardo da Vinci to this day. Another debate concerned the choice of artworks for an educational public programme, where some participants advocated the perceived value of ‘technique’ as the real value. Thus they insisted that educators and curators should stick to showing the ‘best’ art and artists who managed to master art ‘techniques’. Is that what art is all about? ’Technique’? Are those artists who mastered the techniques still to be considered ‘best’ in today’s local art scene? Do we still aim to keep on reproducing the same art valuing the mastering of techniques, through local art education and public education programmes? On expressing the latter questions during the workshop, some participants reacted with further questions which led to healthy arguments.

Nevertheless, just like one cannot expect everyone to value art in a similar way, one cannot expect everyone to perceive the value of arguments. In fact, after the workshop, one of the participants advised me that next time I should “tone it down” as my arguments disrespect well renowned artists! All in all, the arousal of such reactions, together with all that was shared during the lectures, contributed to a positive learning experience during the first day of the VIVA Curatorial School, which made me look forward to attend the rest of the week.